Back to News Overview

The Phoenix-Wings team had been founded only one year before it decided to jump into the challenge. The challenge was the beginning of the team’s journey, leading it to Karongi at the shore of Lake Kivu. 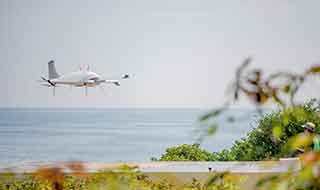 Take-off at the remote island | Image: The African Drone Forum

Preparation for the Challenge

The tasks in the challenge are based on medical transport services performed by drones to an island 20km into Lake Kivu in Rwanda. The most relevant requirements are fully electric propulsion, vertical take-off and landing (VTOL) capabilities and safe operations according to general and national regulations.

After its general proposal was accepted in round one, the team fully focused on paperwork for permission to fly while also performing mission testing using a smaller development aircraft as well as the PW.MantaRay itself. Additionally, numerous tests in hardware in the loop systems were performed to ensure correct operation under the expected mission conditions.

As the only team, Phoenix-Wings was ultimately selected for both cargo tasks, one being an emergency delivery, the other a sample pickup. Therefore, the modular cargo capabilities of their largest cargo drone, the PW.MantaRay, could be fully exploited.

Since the PW.MantaRay is a large drone, the final barrier was to organize the logistics to ship it safely in a big box and additionally finding a way to transport its high energy batteries.

Travelling to Rwanda, #Drones for good

A few days after the plane was pushed into a truck that barely had enough space, the first members of the team boarded their plane in Munich. But as with many things about the trip there, there were some obstacles. Because of bad weather at Kigali, the capital of Rwanda, the plane diverted to Entebbe near Uganda first, which brought along an extra stay at Lake Victoria. 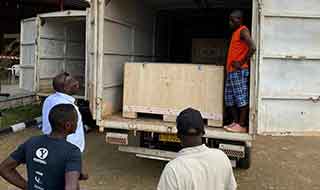 Finally got a truck to transport the PW.MantaRay

After finally arriving in Kigali and picking up equipment at customs, the team made the last part of the journey, the 140 km road from Kigali to Karongi, where the droneport is located at the shore of the lake. Despite bus breakdowns, everyone finally arrived at the flying location and was excited to officially present the PW.MantaRay to the world for the first time.

It was now time to show to the team of international judges, scrutineers and local authorities that the system fulfils the requirements as stated in the application documents. It was also time to demonstrate safe operation of the aircraft in general and under the conditions at the location. Certain local conditions in particular, such as the bay of the droneport basically being a “dead end” with population on both sides and the need for a radio relay placed on a nearby hill, lead to intensive preparation work. Luckily, cooperation between the competing teams was very good from the start, with teams helping each other in situations like radio interference or equipment damaged by power surges. The PW.MantaRay even got struck by heavy falling objects twice, but luckily proved strong enough, sustaining only a few scratches.

After the safety pilot had performed some manual hover flights to demonstrate piloting skills, the job became somewhat routine since all operations were performed automatically from that time on. The fact that all drone and ground system software had been developed in house now produced great benefits, in that everything could be explained and shown in detail. Phoenix-Wings was therefore the first team to receive permission to fly beyond visual line of sight (BVLOS) and performed several demonstration flights.

The PW.MantaRay system was therefore able to fly an automated mission out to the lake on the VIP demo day, demonstrating the potential of medical drone delivery services to a large group of regulators, users and stakeholders from across Africa.

Going back to Kigali for a few days, the Phoenix-Wings team and with the PW.MantaRay joined the African Drone Forum, the symposium event which connects the international community of companies, government organizations and users interested in drone application in Africa. It also serves as the host of the LKC. 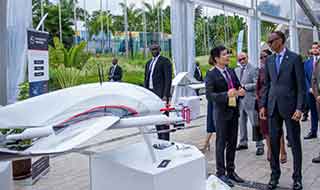 Introducing the PW.MantaRay to Mr Paul Kagame, President of the Republic of Rwanda | Image: The African Drone Forum

The PW.MantaRay system garnered considerable attention at the fair, impressing even His Excellency Paul Kagame, the president of Rwanda. The Phoenix-Wings team also contributed to the symposium through three talks: a kick-off talk, “heavy lifting” plenary from the CTO and a technology trends talk by the lead systems engineer.

After many productive discussions and having made many contacts to potential cooperation partners and customers, the team headed back to Karongi to finally start the real flying competition.

Since several teams had not yet finished their scrutineering, no competition flights were planned for the day. We decided to check our PW.MantaRay by sending it out on a mission halfway to the destination island. Despite the good weather forecast at take-off time, rain started falling as the drone reached its return point. By the time the drone had started to land, the drizzle had turned into a full rainstorm. While we would normally not launch into these conditions, our systems were prepared and the plane performed a flawless automatic landing. The team was soaked by rain but happy to show that they were able to safely handle unexpected adverse weather. 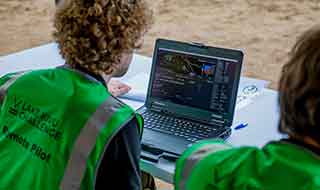 The remote pilot during a BVLOS competition flight | Image: The African Drone Forum

The coordinates of the landing pad on the island had been programmed, but the pad, which measured 10 m by 10 m, did not leave too much room for error. To show a realistic application, we had no pilot on the island but a pad operator who could only abort the landing and send the plane back. The team at the ground station was monitoring data while the pad operator saw the plane approaching. The PW.MantaRay did not disappoint us by precisely landing on the pad.

Now the samples were put into the plane. Since it was the first long distance flight, we chose to stay conservative and exchange the battery while on the island. After receiving permission, the plane was sent on its way back by the single push of a button of the pad operator. After fewer than 20 minutes, the mission finished with a safe landing and handing over the samples at the droneport. 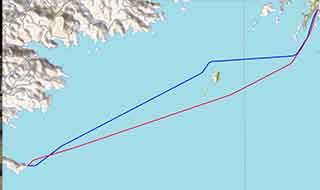 Actual recorded flight path to the island and back again, around 40 km in total

Checking the PW.MantaRay and analyzing data of the first full mission now placed us into a position to perform two missions. Now that we precisely knew the energy consumption, we cancelled battery swapping and increased the amount of cargo. The first emergency delivery mission, carrying 18 simulated blood bags, was flown in the morning, followed by a sample pickup in the afternoon. Turnaround times were reduced significantly compared to the first mission and overall performance was flawless. We could now see that the mission could easily be flown repeatedly, the datalink having a constant connection, including on the island pad, which provided us additional confidence.

To be considered for scoring in each competition, two valid flights had to be performed. We therefore needed to fly only one final delivery mission. This final flight again went as planned, showing a fully automatic flight delivering nearly 7 kg to the island with a turnaround time of fewer than 3 minutes, bringing the total mission time to 39 minutes.

As this was the first opportunity to be compared with other players on the market, the team was happy to receive recognition for some of their key system features: 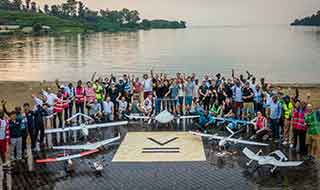 We very much enjoyed the openness and willingness to work together among competitors at LKC. A great community was built there, and we hope that there will be a follow up event in the years to come.
Jian Wang, CEO

Update from 5 May 2020: Phoenix-Wings won the Sample Pickup Competition and the Special Innovation Award worth a total of 75,000£!
Read the press release
Watch the winners’ video on YouTube